Why Does the Camshaft Tensioner Malfunction in Audis?

While there are occasionally some really poorly built vehicles that are released on the market, the majority of them are really pretty good. However, every model seems to develop some quirks over time. Some models have issues getting tires that fit well, or develop problems with power windows and locks… things most of us can get our heads around. Others develop issues deep in the engine or transmission that many have difficulty even understanding. For Audi owners, one of the most frustrating ones is malfunctions in the Camshaft Tensioner.

We want to keep you safe and to save you from expensive repairs. By the time you read to end of this article, you will have a better understanding of what the Camshaft Tensioner is and what to do to keep it running properly.

What Audis are at risk?

Not every model has a major risk of camshaft tensioner malfunction. There are roughly 7 years of engine builds that seem to have the most significant problem with the camshaft tensioner. These are the 4-cylinder TSi engines (both 1.8 and 2.0 liter) that were built between 2008 and 2015.

These models have a problem with their lower hydraulic timing chain, which fails prematurely. This kind of failure can be catastrophic for your engine. The models built after 2015 were redesigned and had a revised tensioner for the timing chain, which has corrected this problem and removed the risk for failure.

What does the tensioner do?

Thousands of years ago, when ships were still mostly paddled by oars instead of sails (think Spartacus), sea captains discovered that you could maneuver boats far more powerfully and efficiently by adding a drum to the deck. One of the sailors would beat the drum in a steady rhythm, and the oarsmen would push or pull in rhythm to the drum. The drum kept them in sync with one another.

The job of a tensioner is to hold the timing chain and keep the motion of the engine and the motion of the transmission in sync, just as the drum kept the oarsmen together. Whoever you have motion between objects there is opportunity for too much friction (causing overheating and damage) or too little connection (causing slippage and disconnection in the engine. The tensioner helps make sure that the tension between all those moving parts stays in perfect balance, so your transmission turns in complete connection with your engine motor.

What happens if the tensioner malfunctions?

If the tensioner stops working appropriately and slack builds up in the timing chain, your engine can suffer some very expensive damage. Imagine what would happen if that mini-tensioner in your seatbelt stopped working. If it broke in the middle of a drive, you might not notice it at all. Your seatbelt would still be snug against you, working correctly for the most part. After you stopped your vehicle, got out, and then returned to drive again, you would begin to notice the problem. As you stretched your seatbelt to fit you, it would not retract, and you could be left with 6 to 12 inches of slack seatbelt sitting in your lap.

This might be awkward, but you could still drive comfortably so long as you did not stop suddenly. In the case of an accident or slamming on the brakes, you would suddenly experience the damage that occurs when moving objects are not held in proper tension. Instead of keeping you steady, your seatbelt would allow you to fly forward for about 6 inches, and then suddenly cut across your chest and stomach, leaving bruises and likely giving you whiplash from the sudden jerk forward and then being yanked back violently.

Imagine your engine experiencing that. The engine revs but the transmission does not move because there is slack in the system. Suddenly, everything locks back into place for a moment, and the entire engine and transmission are jerked together with the force of all your horsepower and torque, pulling pieces apart and then allowing them to crash into each other again. That could cause an even greater tragedy for you if this happens while you are on the road.

How will I know if my tensioner needs to be looked at?

If you hear any kind of rattling noises coming from your engine, get your car to an Audi-certified technician immediately. You will not have time to spare. Better yet, if your 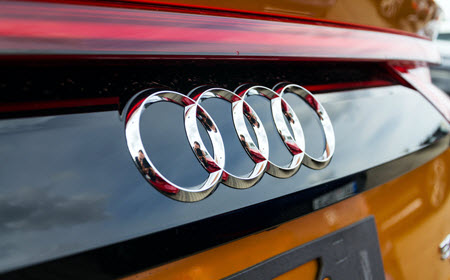 Audi was built between 2007 and 2015, take it to Etown it checked out. It is not a difficult replacement to make, and you will not have to worry about it failing anymore.

If you own a 2007-2015 Audi and have not had it inspected, bring it into Revolution Automotive Services. They have been serving Boston, MA and surrounding areas including Norwood, Westwood, Walpole, Sharon, Canton, Medfield, Needham, and Dover, for many years. Revolution Automotive Services has the certified technicians you need to correctly diagnose your car and make the necessary repairs to have your Audi running safely again.